A cultural landscape at the heart of Europe

Settlement of what was at the time a still unnamed low mountain range, with the 1214 m high Fichtelberg as its highest point in the Saxon part of the range, began in the 12th century. In 1163, in what is now the town of Freiberg, silver ore was discovered, and the Erzgebirge received its present name. Since then the life of the inhabitants has been defined by mining, an industry that was at its peak in the 15th century. This is where the miner's "Glück auf" greeting has its origins. In the course of the 17th century, mining gradually decreased in significance, but did not lose its effect on the people of the region. It found expression primarily in folk art, which right up until the present day has focused extensively on mining and made the Erzgebirge famous. Carvings from the Erzgebirge are items of original miner's craftsmanship that are popular the world over. Miner and angel, mine models, Christmas pyramids and ceiling lamps all represent a distant bygone era. Throughout the Christmas period, windows and sitting rooms are lovingly decorated with these rustic works of art, resulting in the Erzgebirge's other name of "Weihnachtsland" ("Christmas wonderland"). Nowhere, it is said, is Christmas celebrated with a greater sense of its inner meaning than here.

The inhabitants of the Erzgebirge value their traditions. Now, as in the past, Saxon cuisine is an expression of a unique joie de vivre. Their adherence to ancient customs is so evident that the Erzgebirge has remained up until this day the most self-contained region of folk art in Germany. 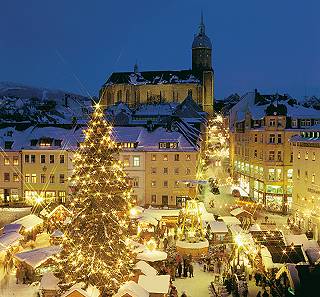 Annaberg-Buchholz is the principal town of the Annaberg district and the cultural centre of the upper Erzgebirge. As a consequence of the decreasing importance of ore mining in the 16th century, bobbin lace making was introduced by Barbara Uthmann in 1561. Right up until the present day this craft is still being taught in special lace making courses. Adam Ries died here in 1559, after 36 years as mine clerk and head of the famous school of arithmetic.

The rich folk art, the people whose lives are embodied by hard work, and whose hospitality is legendary, and the cheerful Saxon frame of mind, as described by Karl May, himself Saxon born and hailing from Hohenstein-Ernstthal - all these give a quite particular brilliance to this region of Germany.